No doubt some of them are dumb enough to spell it "Lenon," which is currently listed as a trending topic.

In fact, "Lennon" seems to show up at least five times as often if you run simultanous searches of Lennon and Lenon.

So it appears that Twitter's trending topic algorithms ignore "Lennon" because the name of the greatest Beatle already shows up thousands of times every day of the year. In other words, the machine thinks Lennon isn't news. Clearly some tweaking needed.

This seems to parallel the situation with the nontrending Wikileaks.

Update: here's a good analysis of the Lenon/Lennon problem, concluding that "But it’s important to stop at this point and note that even though the reasons are understandable, they still make absolutely no sense."


There are two easy ways to find a person on Twitter, even when the person is not using her/his exact name as a Twitter ID.

First, you can use Twiangulate's "keyword" search for the person's name. Here are 53 people who are identifying themselves as "Lucy Smith" on Twitter.

If this method doesn't work, try to think of two or three people who might know the person you're looking for and then input their names into Twiangulate's "common friends" search.

For example, if you're looking to follow Elizabeth Spiers, Gawker's first editor, you might look for her among the friends of NYC media insiders like David Carr (@carr2n) and Gawker (@gawker) and Anil Dash (@anildash.) Sure enough, she's right there.


Wondering who is the hub in a small network? Sometimes it's not the account with 50,000 followers who connects the best within a company or industry, but an account with just 50 followers. Get us a list of people and we'll map their relationships so you can figure out the hidden influencers.


Our colleagues in Budapest helped create this Perez Hilton app. Go ahead and download the app if you're in the mood for some crazy gossip.


Use this search to compare two or three tweeps and see who has the biggest set of followers.

Running a political campaign and want to know how your candidate is doing versus the other candidates? Think that @aplusk has the biggest followers even if @britneyspears has more followers? Want to know which social media influentials are listening to your competition but not you? This is the feature for you. After all, its not just the size of your following, its what you do with it.

To get a feel for how this works, compare @britneyspears, @aplusk and @theellenshow or @sarahpalinusa, @SenJohnMcCain and @newtgingrich or@HarvardBiz, @NintendoNews and @fastcompany or @gruber, @ginatrapani and @zeldman. As you'll see, the left-most column displays, in photo form, which of the three target tweeps an individual is following.

You can also use this feature to learn who your 100 biggest followers are just by entering your Twitter nickname in the first field.

If you want to book-mark this page, here's the URL: http://twiangulate.com/search/#biggest_followers

In returning these results, we ignore results containing tweeps who follow more than 11k people, figuring that those follow decisions don't reflect an actual interest in what his/her friends are tweeting.

Is the race that close? With many pundits predicting low voter turnout, this election could very well be decided by the candidates’ social media clout.

Using Twiangulate, our tool for analyzing twitter friends and followers, we’ve looked at how the candidates stack up.

With 983 followers, Marshall is 28 followers ahead of Cunningham, who has 955 followers.

But Marshall, seasoned NC political insider, seems to have an edge in among influential followers, who include @KatrinaNation, the publisher and editor of The Nation magazine, prominent Durham-based LGBT blogger @Pam_Spaulding, Mother Jones reporter @SuzyKhimm and Politico reporter @davecatanese.

Cunningham, the fresh-faced JD and Iraq War vet, has a few interesting (and potentially influential) followers of his own. Prominent New York gay progressive blog @thejoshuablog follows Cunningham who is seen as the more conservative candidate.

It is no secret that Cunningham has the support of Democratic leaders in Washington and two Democratic Senatorial Campaign Committee staffers, @ArjunJaikumar and @jasonrosenbaumare, among his biggest followers.

To see the full list of the two candidates’ most influential followers, check out this Gdoc.

And here are Cunningham and Marshall’s most influential followers broken out in more detail. (Influential is defined by Twiangulate to be tweeps who are followed by at least 1.5 times more people than they follow and who follow fewer than 11k people.)


Want to compare two or three Twitter Lists to discover who is listed in common? Who is left out? We've got the solution for you. Select the "Compare lists" tab, then input two or three lists. Then sit back and let Twiangulate take care of the rest.

Most hashtagged panels of Day 2 SXSWi 2010


A quick Taghive tabulation of tags used by SXSWers at yesterday's panels:

And here are SXSW hashtags for the last hour. 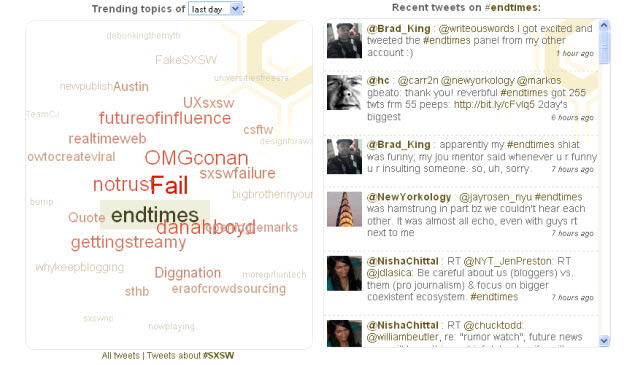 Hottest day 1 panel? Day one of SXSW through the Taghive lens

After a tremendous coding push by Martin, Zsolt and Kristof over the last week, Taghive was functioning like a mind machete, clearing a path through the raucous jungle SXSW. Working late last night, Martin added "last day" and "last week" to the original "last hour" slice.

As I'd hoped, Taghive helped turn the firehose into a water fountain, organizing insights flooding out of various panels, spread between the Hilton and the convention center, into readable channels. Clicking from tag to tag during the day, I got a running summary of each panel. The tag cloud, with its swelling and contracting words, also signaled when a panel was suddenly heating up.

As @dhatfield tweeted earlier this week, "To achieve great things, two things are needed; a plan, and not quite enough time." 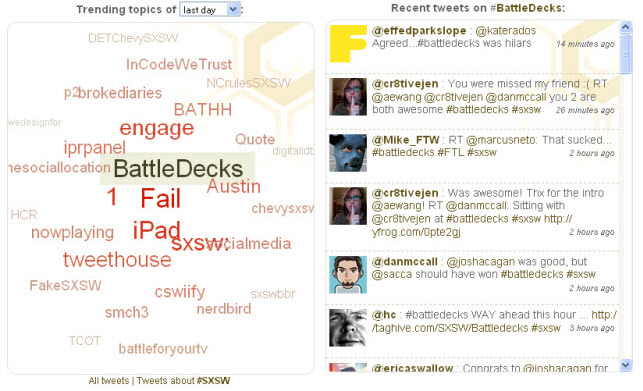 
Great HBR article on slicings and dicings and visualizations of Twitter's volcanic spew of content and data.

Needs some mention of Twiangulate tweep maps. :) For starters, here's a map of the connections among @Harvardbiz's 100 biggest twitter followers.